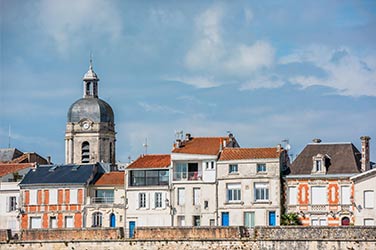 A thousand-year-old city resolutely turned towards the future, La Rochelle is a beautiful and generous city which combines the preservation of an exceptional natural and architectural heritage and an innovative, reasoned and harmonious development of its territory.

Today it has become the most important city between the Loire estuary and the Gironde estuary.

Nestled in the heart of the Atlantic coast, it has made its maritime anchorage a formidable asset for economic, tourist and cultural development.

The aquarium: Facing the Old Port, it is one of the largest private aquariums in Europe.
For 2 hours, visit the heart of the oceans and travel to meet more than 12,000 marine animals , to dream and understand the Sea. Immerse yourself in a fantastic universe, for a magical journey to the great depths … Hold your breath, keep your senses awake, immersion in the gallery of lights will amaze you.

The historic center : A veritable open-air museum, the historic center of La Rochelle is full of architectural treasures. All eras are represented: Middle Ages with arcaded streets, Renaissance with buildings such as the Town Hall, the 18th century with the mansions of the great shipowners. There is wonder around every corner!

The ports: The Minimes marina, the commercial port, the fishing port.

The island of Ré (Additional information)

La Rochelle is linked to the Île de Ré by the Pont de l’Île de Ré.

The Ile de Ré offers marine and rural panoramas, moors, dunes, woods, pine forests, salt marshes, large sandy beaches, marinas . There are also 10 typical villages full of charm , traditional white houses with green shutters, flowery alleys that have spanned centuries of island history. The island is also nicknamed “Ré la Blanche” because of its typical architecture and the white tint of the houses in its villages.

A mosaic of breathtaking landscapes, a unique island heritage and a palette of vibrant colors not to be missed. A preserved art of living, a rich historical past and culinary traditions to discover.

Ideally located between La Rochelle and Royan , the multifaceted city is an essential stopover for lovers of maritime history because of its heritage to say the least unique in the world. It is the city chosen by Colbert , minister of Louis XIV , to establish his vast Maritime Arsenal . It was its ideal location, on the edge of the Charente estuary , that determined this strategic choice.

Many sites of visits, still testify to this sumptuous time.

The last transporter bridge in France still in service near Rochefort .

The International Sea Center and the Corderie Royale de Rochefort.

Located at the entrance to the Gironde, Royan has been a seaside resort for nearly two centuries. Its city center is distinguished by its incredible architecture. Around the Grande Conche beach, an alternation of “Belle Epoque” villas and modern residences.

Guided tour of the city of Royan: Royan the discreet, between La Rochelle and Bordeaux, is one of the most popular seaside resorts in Charente-Maritime.

Also to see near Royan:

Nestled in the heart of an 18 hectare pine forest, La Palmyre Zoo is today one of the most popular tourist sites in Charente-Maritime. Each year, 700,000 visitors flock to its alleys to contemplate more than 1,600 mammals, birds and reptiles representing 115 different species. Beyond being a pleasant and entertaining outing for the public, La Palmyre Zoo also plays an important role in the conservation of endangered species, scientific research and environmental education. It registers 200 to 300 births each year, a success that can be explained by the care given to food and animal welfare. This unique site has become, over time, one of the most renowned zoos in France and a flagship element of the region’s sentimental heritage.

The artisanal village of Talmont-sur-Gironde

15 km south of Royan, on a rocky promontory overlooking the Gironde estuary, Talmont has kept its original plan of a country house, built in 1284 by Edward I of Aquitaine. Dominating the village, the magnificent Sainte-Radegonde church, is still fortified with ramparts. In the village, houses with white facades and blue shutters are revealed behind hollyhocks.

The visit of this city, entirely pedestrianized and with small flowery streets, allows time to appreciate the marine scents so particular to this peninsula resembling a ship. Craftsmen and artists, painters, potters, stylists, small shops, cafes and restaurants await bring a peaceful lively life to these places which have crossed the centuries. On the way back to the car park, visitors can climb the Roche du Caillaud, in order to benefit from an exceptional panorama of the peninsula, the church and the mouth of the estuary.

The troglodyte caves of Meschers-sur-Gironde

The Meschers troglodyte site, near Royan, welcomes you in an exceptional setting on the right bank of the Gironde estuary, in its white cliffs where man has made his nest and in one of the most beautiful landscapes. more unusual of the Saintongeaise coast. Originally carved out by nature, these “holes” were enlarged by man to become in the 19th century real troglodyte habitats (some caves are still occupied today).

The “Matata” and “Du Regulus” Caves are located in the limestone cliffs. These troglodyte dwellings were dug by the sea 65 million years ago, then engineered by humans and inhabited throughout time. Each has its own history and mysteries! During your visit, you will discover themes as diverse as geology, estuary and plaice fishing, 19th century taverns and cave dwellings.