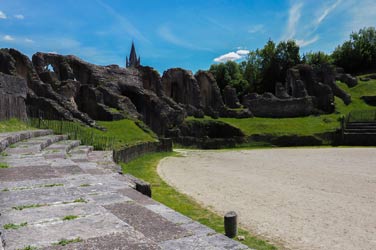 La Saintonge, between the Atlantic Ocean and Cognac, is an ideal place to recharge your batteries in Charente-Maritime. In the south of the department, the old province stretches out through hilly nature, the capital of which is Saintes.

Cultural and archaeological richness of Saintes

Mediolanum Santonum, today called Saintes, first developed thanks to the Romans. Located on the Agrippa road which linked it to Lyon, today it preserves the remains of a prestigious Roman city!

In the 10th century, Christian fervor transformed the Saintonge valley, dotting it with Romanesque buildings with magnificent sculpted capitals. Saintes is still an important stopover today for pilgrims on the Camino de Santiago de Compostela.

Gallo-Roman remains of Barzan and Saintes, including the amphitheater of Saintes, the Arch of Germanicus or the thermal baths of Saint-Saloine.

Romanesque churches and religious buildings that can be found in many towns and villages.

The stops on the Camino de Santiago, such as the Pons Pilgrim Hospital, listed as World Heritage.

The fortified towns and churches along the Charente.

The historic centers of Saintes and Saint-Jean-d’Angély.

Guided tours of the National Stud of Saintes.

Visits and tastings in cellars and wine estates.

Barge trips on the Charente: In summer, the barges take you on thematic cruises from one hour to one and a half hours. Climb aboard these traditional wooden boats and let yourself be rocked by the Charente River. There is something for everyone with cruises on the history of the gabariers or the mysteries of the River.