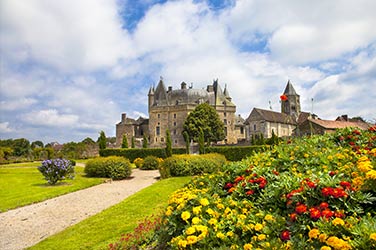 The Dordogne department is essentially rural and marked by a large cultural, archaeological and historical heritage.

Its landscapes, its prehistoric sites , its caves , its castles and its gastronomic specialties are worth the Dordogne to be a tourist department, allowing to develop the brand image of Périgord :

Country of Man and Prehistory , the Périgord , registered in the department of Dordogne , is made up of four parts.

In the south-east of the Dordogne and 200 kilometers from Bordeaux , the Périgord noir , is historically the oldest appellation of the four. It owes its name to the blackened trunks of the oaks which inhabit the landscape.

In the heart of Périgord noir , Sarlat-la-Canédat deploys its charms of beautiful Renaissance city.

Between its sumptuous castles, its magnificent gardens and its natural and prehistoric caves , the Périgord Noir unveils a heritage of exception offering a real journey through time. Besides its history and its rich heritage , Périgord is famous for its gastronomy . Country of chestnut , truffle and walnuts, porcini mushrooms and strawberries, confits and foie gras , the richness of its gastronomy and the quality of its local products help to shape the identity of the region. More than anywhere else, a certain art of living is cultivated there and the reputation of local products is well established !

The Lascaux II cave, an artificial replica of the Lascaux cave (world heritage).

The gardens of the Manoir d´Eyrignac (remarkable gardens)

The remains of troglodyte dwellings in Moustier

Boat trips on the Dordogne : aboard traditional boats called gabares. This boat trip will introduce you to four of the most prestigious castles in Périgord.

Capital of the Périgord Noir, Sarlat is an exceptionally well-preserved city. Over 1,000 years of architecture live through its alleys, slate roofs and walls of warm blonde stone. The impressive number of buildings registered or classified per square meter makes Sarlat the leading European city in terms of heritage.

It has long been the natural setting for many cinema films and the 3rd th filming location in France (Les Misérables, La Fille de’Artagnan, Jacquou Le Croquant, etc.). Sarlat is today one of the most beautiful medieval complexes in Europe.

Lascaux , the most famous cave in France and the most visited in the world , is located in Montignac in the Vézère valley in Dordogne.
The walls of this cave, discovered in 1940 by teenagers, are adorned with nearly 1900 painted or engraved representations of animals, dating from around 18,000 years BC!
A true masterpiece of Upper Paleolithic cave art. The cave, 150 meters long, was inventoried in 7 decorated sectors: the Hall of the Bulls, the Axial Diverticulum, the Passage, the Nave, the Cabinet of the Felines, the Apse and the Well.

The original Lascaux cave is today only reserved for scientists and the privileged, its definitive closure to the general public in 1963 having been made inevitable due to the consequences of its tourist exploitation.

However, in order to allow all audiences to admire masterpieces of prehistory , it is 200 meters away that an exact copy, Lascaux 2 , was opened in 1983. An identical reconstruction of the Lascaux site was undertaken (same paintings, same techniques, same pigments…). This facsimile reproduces the Hall of the Bulls and the Axial Diverticule, that is to say 90% of the paintings of Lascaux.

Lascaux It is nonetheless an exceptional site to visit offering a striking spectacle!

The village of “Les Eyzies” described as “World capital of prehistory ” is at the heart of the,” the Vézère Valley ”where there are many cliffs and rock formations, surrounded by rivers, hills and very green countryside. Bordered by caves and occupied since prehistoric times, the Vézère Valley has been classified in its entirety as a heritage site by UNESCO.