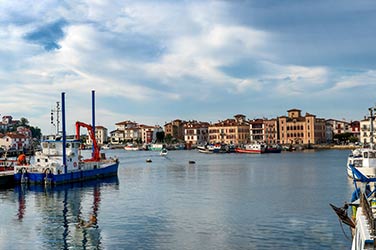 Located in the extreme southwest of France, the French Basque Country is part of the Pyrénées Atlantiques department which also includes Béarn.

The Basque Country draws its inspiration from its heritage and its harmonious contrasts, between the Atlantic Ocean and the Pyrenees, between the heritage of the ancients and contemporary creations.

A stone’s throw from Spain, people come here for its beaches but also for its special culture, authenticity and gastronomy. People come here to seek out this identity of the land, its traditions and popular festivals, this art of good living and the quality of a protected architectural environment.

The Basque Country has a number of treasures: Castles, Churches, Priories, Caves, Museums, Exceptional Natural Sites and a multitude of other reasons to stay in the region …

The French Basque coast , from Biarritz, Bayonne and Anglet to Saint Jean de Luz and Hendaye: The fishing ports, seaside tourism, Thalasso, luxury hotels but also the typical small villages in the inland, their churches, their traditional Labourdine houses …

Lower Navarre , tossed between France, Navarre and England has undergone many influences as evidenced by its architecture: Saint Jean Pied de Port, Irouleguy and its wines, Saint Etienne de Baïgorry, Saint Palais , as well as pastures and forests …

Biarritz : An elegant seaside resort in the south-west of France, Biarritz was once the favorite vacation spot of the nobility. It is now the European surf capital. In Biarritz, you will hear French, Spanish and Basque spoken. Its Grande Plage is the city’s real center of attraction. Just behind, a visit is essential to discover the restored “Art Deco” casino, before strolling through the streets to the old port.

St Jean de Luz : A city which has managed to preserve its authenticity and which has just been awarded the “City of Art and History label” awarded by the Ministry of Culture. Its historical environment and its city center endowed with an exceptional urban heritage, give it a very special character and make it, all year round, the most popular place in the south of Aquitaine. Saint-Jean-de-Luz has two other major assets: its port and its bay.

Saint-Jean-de-Luz is an authentic city with a particularly rich past!

Ainhoa ​​: A country house on the roads of Saint-Jacques de Compostelle! A few kilometers from Espelette and Sare, the village boasts, along its unique street, the white and red facades of its typical houses. Its pediment, located in the heart of the village, testifies to the importance of ball games in this region.

Espelette : A village located at the foot of the mountains and only 20 minutes from the Basque coast. Espelette has managed, over time, to retain all its authenticity with its beautiful houses, its recently restored castle, its church, its washhouses … Espelette is best known for its famous pepper. While visiting the village, we discover the traditional drying method where strings of peppers are put to dry in the sun on the facades of the houses, thus perpetuating the tradition.

Saint Jean Pied de Port: A medieval town whose tourist attraction continues to grow is a must-see destination in the Basque Country but also a major stopover for pilgrims on their way to St Jacques de Compostela. Saint-Jean-Pied-de-Port is a fortified medieval city. Its foundation dates back to the 12 th century. Nestled at the foot of the route des crêtes and the Col de Roncesvalles, it seduces all its visitors with the welcome of its inhabitants and its atmosphere from another time . Saint-Jean-Pied-de- Port is also the citadel , the prison of the Bishops , the Porte de Saint-Jacques , listed as a World Heritage Humanity by UNESCO , and, a multitude of alleys where to unearth the treasures of craftsmanship. Saint-Jean-Pied-de-Port is a Mecca of Basque culture. You will be able to hear its language, its music, its songs, admire its dances, its games, taste its gastronomy and discover its astonishing cider houses.

La Rhune and its little train: In the town of Sare, about ten kilometers from Saint-Jean-de-Luz, this massif, the highest point of the Basque Coast, offers an exceptional panoramic view of the French and Spanish Atlantic coast as well as the Pyrenees chain. An authentic collector’s rack train dating from 1924 will take you in 35 minutes, at an altitude of 905 meters, to this mythical summit of the Basque Country!

Throughout your ascent, you will discover Pottoks , sturdy little Basque ponies living in total freedom, Manech ewes and griffon vultures, raptors emblematic of the Pyrenean range. Up there are also “ventas”, small shops located on the Franco-Spanish border.