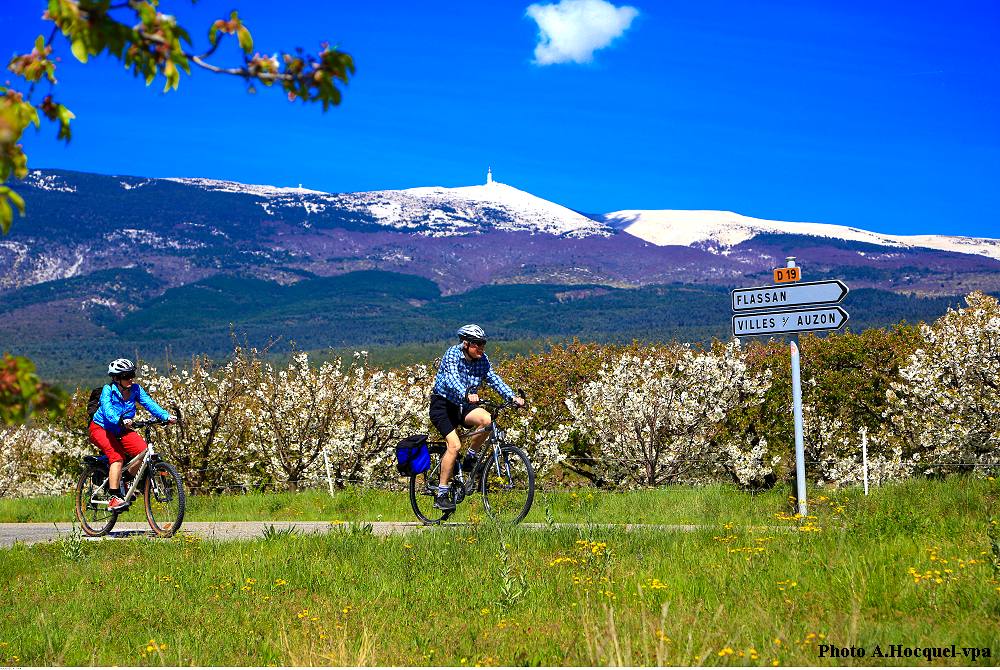 Cycling Mont Ventoux and Luberon in Provence, for avid or electric riders

This 6 days, self guided cycling trip though the Ventoux and Luberon mountains allows you to explore the magnificent Vaucluse area in the heart of Provence. This cycling itineraly should be theorically for cyclists who regularly cycle. However, it is accessible to everyone by electric bike! Starting from Bedoin, at the foot of Mont Ventoux and ending in Roussillon or Gargas village in the heart of massif of Luberon, the route includes stages every day allowing you to fully enjoy the region, with options offering different levels of difficulty. You can choose, for example, to climb the legendary Mont Ventoux, or stroll through the Gorges de la Nesque or take a detour to pedal as close as possible to the Dentelles de Montmirail or reach the village of Gordes a little further.During this cycling holiday, you will cross the wine-growing landscapes of the Côtes du Rhône and their famous villages of Vacqueyras, Gigondas and Beaumes de Venise at the foot of the magnificent “Dentelles de Montmirail”, You will climb the “Giant of Provence” also called “Mont chauve” or “Magic Mountain” that is Ventoux, legendary stage of the Tour de France or bypass it and snake through the Gorges de la Nesque, a wild and grandiose canyon with spectacular views. You will cross the lavender fields towards Sault and stroll through some of the most beautiful villages of France such as Séguret near Ventoux or Gordes and Roussillon in the Lubéron massif, famous for its ocher colors and its “ocher trail”. You will also stay at Fontaine de Vaucluse which houses the Santon museum and made famous by its chasm. 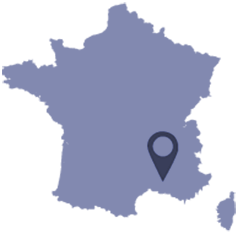 The possibility of climbing the mythical Mont Ventoux

Arrive in Avignon at the time of your choice. An early arrival will allow you time to visit the ancient city of Avignon and its highlights, such as the Palace of the Popes, located a few minutes’ walk from your hotel.

Our taxi partner will first transfer you to Bédoin where you ́ll be outfitted with your rental bike.

If you have the time and inclination, you may ride a loop around the fabulous Dentelles de Montmirail (a vertebrae of dramatically jagged mountains). Your toast-giving skills may come into play during today’s loop. You’ll wheel through some of the most noted wine-making villages in Provence, starting with Beaumes-de-Venise. From a scenic spot at the foot of the Dentelles de Montmirail, this old-world village is home to Muscat de Beaumes de Venise, one of the planet’s most applauded wines. Vacqueyrasis next, followed by Gigondas and then Séguret, which lives up to its hype as one of France’s “most beautiful villages.” As your loop begins to bend around, you’ll pedal into Vaison-la-Romaine. Divided by the Ouvéze River, Vaison-la-Romaine’s lower half features a trove of Gallo-Roman ruins, making it one of Europe’s largest archaeological sites, while the upper half, perched atop a knuckle of rock, rates as a monument to medieval architecture.

Before reaching Mazan, you’ll have the option to ride up to the tiny village of Suzette, a modest ascent (400 m) that, if you so choose, will add 20 km to the day’s ride.

If you arrive too late or don’t feel like doing the loop, you have the option of riding the10 km from Bédoin to Mazan.

Depending on preference, you’ll have the option to climb Mont Ventoux, the “Giant of Provence,” or go a more leg-friendly route through Gorges de la Nesque. The first option allows you to climb a classic route up Mont Ventoux, which touches the sky at 1,912 meters (6,273 feet). This barren peak enjoys all-star status with riders, having appeared in the Tour de France 15times since 1951. The second option corkscrews along the floor of the Gorges de la Nesque and averages, by our count, 11 picture-stops per mile (14 if you visit the Chapelle Saint-Michel, a tiny, 12th-century chapel tucked under acliff). You’ll stayin Saulttonight, a tiny village that’s as historic as it is beautiful.Surrounded byfields oflavender, your ride around Sault could resemble an unframed Monet painting in 3-D (depending on the time of year)

Today’s ride allows you to experience rural Provence at its best. You’ll wheel across rolling green hills and through timeless villages hemmed with vineyards and fruit orchards…the type of decaffeinated setting that causes sound-minded people to ponder quitting their jobs, moving to Provence,and spending their remaining years in sun-drenched fields applying oil paints to canvas. The village of Venasque, designated one of France’s “most beautiful villages,” highlights the ride. Fontaine-de-Vaucluse will be your home for the night. Huddled at the foot of the Vaucluse Mountains, Fontaine-de-Vaucluse features the fifth largest underground spring in the world. Against a backdrop of craggy cliffs and draping foliage, the spring’s emerging turquoise-colored waters are extremely camera-worthy.

It won’t take long for the day’s wow-factor to kick in when you ride into Gordes. Perched atop a hillside, it is one of France’s 144 “most beautiful villages”. Ancient stone buildings line its many narrow cobbled alleyways and arcades, all of which lead to the Chateau de Gordes, the village’s iconic landmark. Nearby Sénanque Abbey, located below Gordes, is worth visiting as well. From here you’ll bicycle through a chain of scenic, hillside villages – Menerbes, Lacoste and Bonnieux – before reaching Roussillon, yet another of France’s “most beautiful villages,” which once served as home for writer Samuel Beckett. Last night in hotel in Roussillon (standart level) or Gargas (Superior level).

Transfer to Avignon and departure. We will usher you to Avignon so you can continue on your adventure.

We take care of transporting your luggage at each change of accommodation so that you travel light and take full advantage of your daily hike.

You leave your luggage at the reception of your accommodation before your departure .

At the end of the afternoon, you will find them at the reception of your new accommodation or directly in your room.

Your travel record corresponds to the documents or files you receive before your trip (usually a month before) and upon arrival at the first accommodation.

On request and depending on the circuits:

On this circuit, we suggest that you provide you with the choice and by reservation:

For the youngest, we can offer depending on age and size

At the end of the tour, the bike must be left at the last accommodation with its equipment. We will take care of their recovery.

Comfort : The circuit mainly presents hotels classified 2 and 3 stars (or equivalent) and rooms of host.

Luxury : The circuit mainly presents 4 and 5 star hotels or equivalent

Our support team remains available for the duration of your trip.