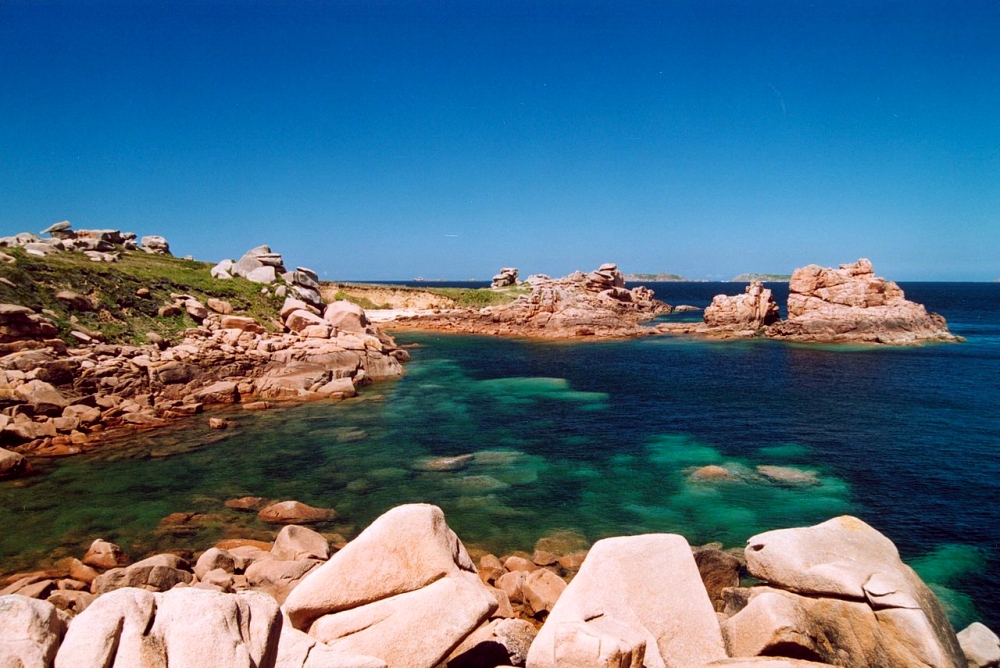 Bike tour in northern Brittany along the Pink Granite Coast

Discover a bike tour in northern Brittany. Among the many coasts of Brittany, the Pink Granite Coast – by bike – located north of Lannion, is certainly the one with the strongest personality, with its fishing ports like Perros-Guirec, Trégastel, Pleumeur-Bodou and Trébeurden. There, the pink granitic chaos, formed over 300 million years ago, and sculpted by the combined action of wind, rain, salt and frost, is today an extraordinary landscapes…, a natural jewel of Brittany.

After a first night in Lannion, you reach the Armorican coast and the “Pointe de Bihit”. Already a breathtaking panorama! After a nice warm-up on the “velomaritime” road bike in the Breton countryside and along the wild coast, you will reach the Ploumanac’h lighthouse. The spectacle of pink granite blocks then begin! You reach the village of Perros-Guirec.

The journey takes the eastern route and changes of style. The pink colore loses its intensity, but remains wild and chaotic until Treguier, a small town of character where you will spend the night. Few surprise on this ride such as the tip of the castle and the famous house of Castelmeur.

The next day, you will succumb to the charms of Brittany’s historic fishing ports. This bike ride takes you to one of the most famous, Paimpol. Place of marine songs festivals or old rigging, sailboat races, the city offers many festivities on the port. A rich history with Newfoundland and the ardor of the Paimpolais sailors who left there for several months every year. Cod cuisine is still a specialty here that we invite you to taste.

From paimpol, we suggest a loop journey towards a flowered island, a little gem of the northern coast, Bréhat island.

Finally, you will complete this loop by biking through the inland, cycling through the village of Pontrieux, a small listed historic town in Brittany, before reaching Lannion, the end of your cycling trip in Northern Brittany. 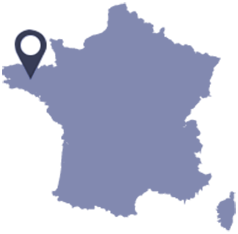 Reception at your hotel. Night in Lannion.

From Lannion, the route offers you a beautiful cycling day between land and sea. You reach the “ponite de Bihit” in Trébeurden which presents a breathtaking panorama. The route takes you to the foot of the Ploumanac’h lighthouse in the heart of the pink granite coast. The show of pink granite blocks can then begin! You reach the village of Perros-Guirec.

You leave the beautiful seaside resort of Perros-Guirec and follow the wild coast. The pink gradually withdraws and gives way to “Ajoncs coast”. You reach the “Pointe du Chateau” and discover the famous “house between the rocks”. A few steps away, the Gouffre de Castel Meur. You go up along the Jaudy river to the small town of Tréguier. The church, the alleys and many granite and half-timbered houses make the character of this village. You reach a 17th century mansion where you will spend the night and have dinner.

Dinner and overnight with breakfast in hotel

Your cycle along both the Jaudy estuary the Trieux river and reach the small town of Lézardrieux. Set back from the sea but bathed in the waters of the English Channel, the village is perched on estuary’ bank. You cross the Trieux estuary and leave the “Trégor land” to join the “Goëlo land”. Paimpol is its largest port. This journey ends on the docks of this charming fishing port.

Cycling day to discover the pretty Île de Bréhat. You will have to ride few kilometers to reach the Pointe de l’Arcouest. Then take the boat for few  hundred meters. Welcome to Bréhat island. An island that seems much further from France by the exoticism of its vegetation!  On Bréhat island, no car, so walking or cycling is a real pleasure! Reach the Paon lighthouse in the end of the island. Here you will enjoy a beautiful maritime panorama.

This last ride towards Lannion leaves the coast, the opportunity to discover a few labeled small towns: La Roche Derrien and especially Pontrieux. Pontrieux owes its name to the bridge which crosses the Trieux – the river which separates the Goëlo land from the Trégor land, two historic countries of seigneurial Brittany.Night with breakfast in hotel

End of stay after breakfast.

We take care of transporting your luggage at each change of accommodation so that you travel light and take full advantage of your daily hike.

You leave your luggage at the reception of your accommodation before your departure .

At the end of the afternoon, you will find them at the reception of your new accommodation or directly in your room.

Your travel record corresponds to the documents or files you receive before your trip (usually a month before) and upon arrival at the first accommodation.

On request and depending on the circuits:

On this circuit, we suggest that you provide you with the choice and by reservation:

For the youngest, we can offer depending on age and size

At the end of the tour, the bike must be left at the last accommodation with its equipment. We will take care of their recovery.

Comfort : The circuit mainly presents hotels classified 2 and 3 stars (or equivalent) and rooms of host.

Luxury : The circuit mainly presents 4 and 5 star hotels or equivalent

Our support team remains available for the duration of your trip.

Notice: Undefined index: taxonomy in /var/www/www.evazio.com/htdocs/wp-content/plugins/sitepress-multilingual-cms/classes/query-filtering/class-wpml-query-parser.php on line 275
Short bike tour in the Gulf of Morbihan, Brittany
The tour of the Gulf of Morbihan by bike. Southern Brittany
Cycling holidays towards the Pointe du Raz, from Quimper, Brittany